The current method of explaining all game mechanics involving elements

Using elements to cause reactions are a key cornerstone of Genshin Impact. To optimise your damage and teambuilding, you must understand the precise mechanics behind how elements are applied, react together, and persist. Let’s first define some key terms.

Finding:
Enemies apply the same 1 unit, 2 unit system to us that we apply to them. They follow exactly the same Elemental system we do.

Evidence:
I tested the number of frames that elements last on my character, upon being hit by attacks from these enemies:

Unlike when testing on an enemy, these are exact frame values. There seems to be a slight delay on when elements appear over an enemy's head. For example, if you cause a reaction on an enemy, the reaction text will appear one or two frames before the Element appears over their head. Also, at the end of an Element's duration, it slowly pulses and fades out, making it difficult to find the exact frame at which it disappears.

On our own characters, the Element does not fade out, but immediately disappears between frames. This allows us to more precisely measure Elemental durations: for example, there are precisely 720 frames between the Electro appearing above my health bar when I am shot by an Electro Shooter, and the Electro disappearing from my health bar when it times out. So it lasts exactly 720 / 60 = 12s.

Enemy Skills also "fix" the decay rate the same as our Skills. In this example, I am hit by a 2 unit Pyro, then 11 seconds later I am hit by a 1 unit Pyro. The Pyro aura lasts precisely 6 seconds from the point I am hit with the 1 unit Pyro. This matches the behaviour we see ourselves when going 2u -> 1u; we have 1 unit still decaying at the 2 unit rate of 6s and 12s.

Enemy Skills follow the same reaction reductions we do. In this example, I use Hilichurl Shooters to perform a Reverse Melt on myself. The Pyro Shooter applies 2 Pyro to me, then the Cryo Shooter applies 2 Cryo. Since this is a Reverse Melt, the reduction is 0.5x2 so 1 unit reduced. The Pyro lasts a total of 4.5 seconds from initial application to falling off, so the Melt reaction reduced the timer by 7.5 seconds. This matches the behaviour for a 1 unit reduction.

In addition, the reduction of 7.5s is a precise frame count. This is the "taxless" value, compared to the "taxed" value of 6s. This allows us to calculate the exact value of the so-called "Aura Tax": 6/7.5 = 0.8. This confirms our theory that the Tax is roughly 80%, that is exactly correct.

This allows us to more precisely measure frames on reactions due to the way friendly auras appear clearer than enemy auras. Since enemies can have 1 or 2 unit attacks, it's possible some enemies have 4 unit attacks for elements we have previously not been able to test with 4 units. There may even be 3-unit enemies. This opens up more possible reactions we can test.

Beginner’s Guide to Reactions and the Gauge Unit Theory​

Please refer to the Gauge Unit Database when reading this article

Why is decay rate significant?​

Advanced Notes on Reactions and the Gauge Unit Theory (WIP)​

THE FOLLOWING SECTIONS ARE UNDER CONSTRUCTION

The concept of an Elemental aura/gauge​

The 3 Types of Gauges​

The Concept of Gauge Units (U)​

What is a gauge unit?​

How are Gauge Units assigned to Elemental sources?​

All Elemental sources apply a 1U, 2U, or 4U Elemental aura/gauge onto an enemy.

Please note that Gauge Units are not a direct conversion from Elemental aura duration. This is why you cannot simply divide the 2U duration by 2 to find 1U duration.

How are Gauge Units consumed in Transformative reactions (except Swirl and Crystallise)?​

How are Gauge Units consumed in Amplifying Reactions?​

How do Gauge Units translate into decay rate?​ 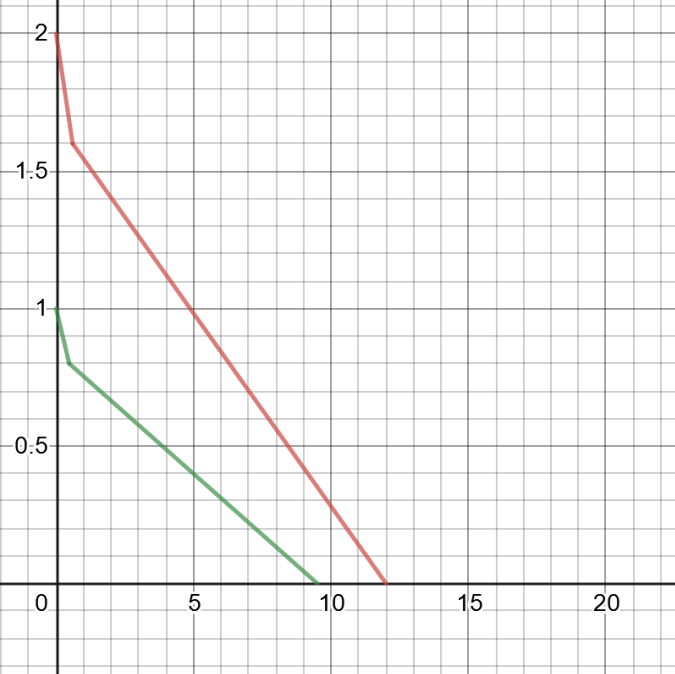 What happens when you apply consecutive auras of different U values?​

In the above section, we stated that different U auras have different decay rates. 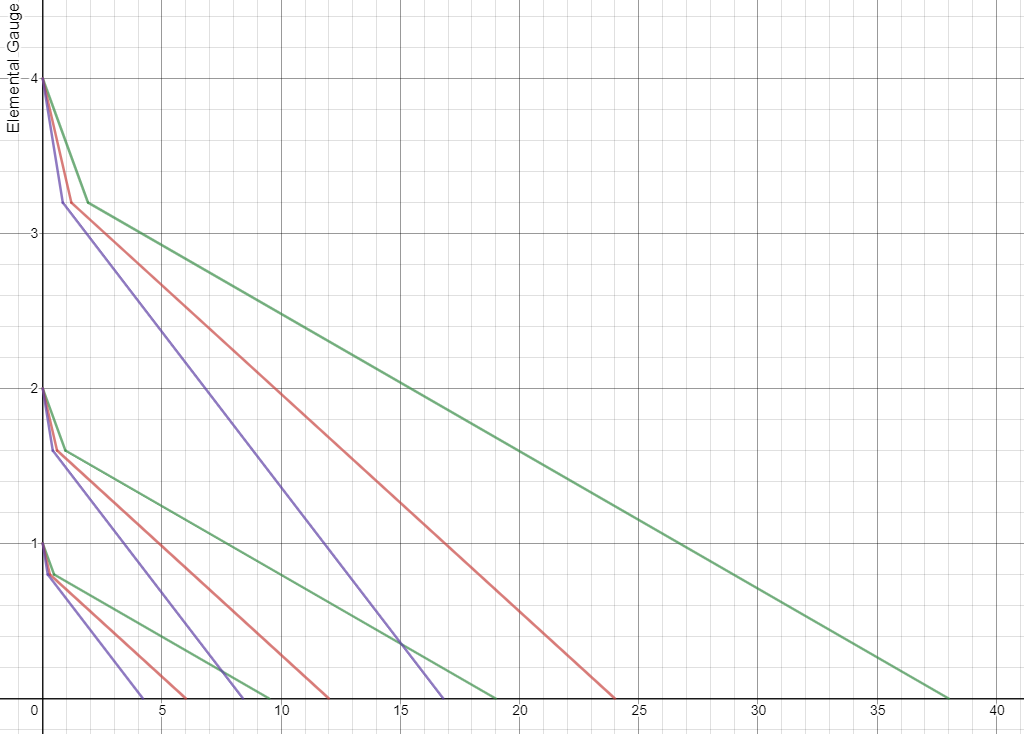 Theory:
The Weak/Strong 9.5/12s theory of auras is incorrect. There is also no Very Weak or Very Strong upgrade/downgrade system. Elemental applications instead apply 1, 2 or 4 Gauge Units (GU). The amount of time a GU persists for can vary, and depends on how many GU were applied by the first ability to hit that enemy. The "stronger" the ability was that started the aura/the more GU it applied, the faster the aura decays.

Evidence:
Robin provided me with info from CN, which allowed me to make this graph: Desmos

This graph accurately predicts all the downgrade/upgrade, Vaporize, Melt oddities that we have so far struggled to account for. It does so by separating the Elemental gauge amount from the length of time that Elemental aura stays on the enemy: they are related, but separate properties.

In this video we see that the Pyro only lasted 4.55s, so the Electro reduced the timer by about 7.45s, not 6s as expected.

This can be explained by the graph: the rate of decay is non-linear (otherwise known as the Aura Tax). This has been debunked by Aluminum#5462, check Tax Evasion for more.

The rate of decay of GU is determined based on the strength of the first aura application on an enemy, until all auras fall off that enemy. If you apply a 1GU aura, which decays slowly, then use a 2GU move of the same Element, you now have 2 GU of that Element on the enemy, which is still decaying at that slower rate. This is most obvious when done with initial hit of Beidou's Burst, which is the only known 4GU move currently in the game.

This also means you can get three 1GU reduction reactions after a Beidou Burst. Possibly 4, if your timing is fast enough.

The length of time a 1GU application would last after an initial application's decay rate is as follows:

There are no 3GU moves currently in the game, but theoretically a Weak application after a 3GU initiator would last roughly 4.8-5s. We do not know the exact formula yet.

The full version of the graph includes all combinations of GU and Decay Rate. The higher the initial GU application, the faster the decay rate:

For a given decay rate, you can predict the time deduction caused by a 1GU deduction using the slope formula from the graph: (0.95 x T)/0.8, where T is the seconds a Weak aura application lasts for at that decay rate: 9.5, 6, or 4.2

Significance
If possible, starting your Element applications with a Weak aura will make it slightly easier to chain reactions, as the decay rate of any further applications will be lower. This is a small difference as you are usually limited on reactions by GU, not time.

Vaporize and Melt reduce their gauge by 0.5x or 2x (presumed, no way to test, could be 3x or higher) their usual reduction, depending on Element order.

Finding:
As of 3.0, decay rate of Pyro aura updates differently than other auras. Every time Pyro is applied, the decay rate either:

Significance:
Likely to be a bug.

Theory:
Self Gauges and Leylines of all types do not clear the aura if they trigger a reaction and subtract a U value greater than the remaining aura.

Significance:
Self gauges and Leylines seem to follow a different rule set compared to triggers that happen on enemies and this works regardless of where the aura came from. In the future, larger self applying gauges could allow for other builds such as @HailCorporate#2970's self-overloading Razor that takes advantage of aura oscillation with repeated self gauge application. It is also important to note that over-cleansing is possible where applying a gauge that is bigger than an aura you want to overwrite could result in unwanted reactions if something else triggers the new aura.

Finding:
It has been known that you can use self auras to infuse Anemo ults (Venti/Sucrose) with elements instead of enemy auras. This happens to include the aura applied by leylines so it allows for elements not present AT ALL otherwise to be practically included in a team.

Significance:
With this technique you can infuse elements that are otherwise not present AT ALL within your team or the enemies, allowing for compositions to cheat the matching Element into their team at little cost. A current powerful application of this is using this to deal with Hydro Fatui gunner's shield in lieu of bringing an actual Electro unit, decreasing the number of constraints on floor 11 team construction if you can't simply kill the Fatui before they put up the shield.

Finding:
Self aura section in TCL is pepega

It should also be included that enemy shields, innate auras etc. are self auras.

By: Some Proselytizer#8340 and Aetherpon#5730
Discussion

Finding:
Reapplying Hydro on a Freeze Aura will not Extend the Duration of Freeze.

Evidence:
Duration testing was done on a 4A aura with 3U subtracted: YouTube

Significance:
Sadly for the setup I wanted to test when I started this ticket, tax cannot be evaded since the aura starts at the taxed gauge. For the front page of Elemental gauge theory, this doesn't mean much since it explains things using tax on reaction, which is consistent with Hypothesis 2. However, since the original evidence is linked on the front page, it should be mentioned somewhere that Hypothesis 1 is inaccurate.