A traveler from another world who had their only kin taken away, forcing them to embark on a journey to find The Seven.

Finding:
After a certain quest chain in Chapter III: Act I of the Sumeru Archon Quest, the Traveler obtains a Base ATK buff of exactly 3 Base ATK. This buff persists on every Element and is permanent.

Theory: Lumine is better than Aether because her CA 2nd hit multiplier is higher.

Evidence: Attached will be 2 images of T6 AA talent pages. The first will be Aether and the second will be Lumine. Using these values, and counting frames, I found that Aether has higher MV/s on N1, N2, N3, and N1C than Lumine but less on every other AA combo. My findings are in this sheet: Google spreadsheet

Significance: Although, I wouldn't recommend using AA for either MC, Aether comes out on top with shorter AA combos which would be more preferred combos anyway. This means that while Lumine has on multiplier higher than Aether's, her AA is still worse than that of Aether. It really shouldn't matter unless you play main DPS though, so play who you want.

Finding:
Geo MC Starfell Swords can be manually detonated by over-capping on the maximum amount of Geo Constructs.

Finding:
The Geo Traveler's Elemental Burst walls block a Geovishap from being able to jump over it.

Evidence: Video
As shown in the video, a Wake of Earth wall in between the Geovishap and the player completely prevent them from being able to jump over it, stopping their jump at the wall's edge.

Significance:
Although a minor damage source, Geo Traveler's A4 Passive damage is increased by DMG bonuses towards Normal Attacks.

The possible explanations for this is that the Elemental proc occurs during a specific frame that is shared between both twins, and it just so happens to occur after Lumine's N5 but before Aether's N5.

Another possible significance is that this might be a clue to how the Travelers are coded. They might share the same timings for other similar things that manifest at different moments just because of animation difference. As of writing this, no other application comes to mind.

Finding: Geo MC C1 10% CRIT Rate buff becomes active after stone wall is created and does not affect the Burst itself upon activation

Evidence: YouTube
Video shows Geo MC with c6 and >90% CRIT Rate not scoring CRIT hits on 3rd hit of his Q. If the CRIT bonus applied to Burst damage, it would be impossible to not CRIT.

Theory:
The visuals (as in the Geo spikes, will henceforth be called stone walls as per game nomenclature) do not actually match the hitbox of the stone walls. The hitbox can exist without the visuals, and it behaves in a way that does not match the visuals. 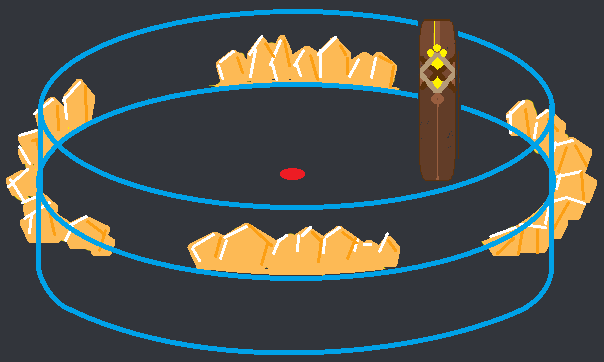 Finding 1:
Wake of Earth has some weird properties. Wake of Earth can go invisible if you teleport away. The actual hitbox of the stone walls and the CRIT Rate buff from Invincible Stonewall (C1) still persist.

Significance:
There's probably more things we don't understand about Geo Constructs behavior, and this might help us understand why the stone walls from Wake of Earth do not count for the Geo Constructs limit.

Finding 2:
The hitbox for the stone walls from Wake of Earth (Q) actually gets affected by enemy attacks, easily displacing the orientation of the wall and not matching the actual visuals. This means that the hitbox can move while the visuals of the stone wall stay in place.

Unconfirmed theory:
The displacement is affected by enemy moves that can apply sufficient enough knockback.

Significance:
Helps us better understand how the stone walls work. Playing around GMC Q means trying to prevent enemies from hitting the walls by staying quite a bit of distance from the stone walls so the mobs stay grouped inside the Burst.

Here are the associated findings:
Stonewall buff doesn't immediately apply to characters on switch. It refreshes every tick (estimated to about 1 second). The buff also lingers for about two seconds.

Significance:
Abilities that snapshot shouldn't be immediately cast on switch. The lingering buff can somewhat help if a character exits the buff area.

Finding 4:
Stonewall buff is active even if the stone walls get broken or despawn via other means.

Significance:
The buff area is independent from the stability of the stone walls. Just stay inside where the circle would have been anyway.

Finding 5a:
Stonewall buff has a vertical limit around the cast area of Wake of Earth (Q). Going downwards away from the cast point means losing the CRIT buff. The depth of the buff seems to be a little less than the length of Zhongli's Stone Stele.

Finding 5b:
Stonewall buff has an upward vertical limit around the cast area of Wake of Earth (Q). The height of the buff seems to be a little less than the length of Zhongli's Stone Stele.

It is possible for Xiao to not get the CRIT buff if he:

However, the CRIT buff reapplies itself when you get close to the ground.

Note: For the following tests, Xiao has 90% CRIT Rate to observe the 10% CRIT Rate bonus from the Stonewall buff. The tests are looking for scenarios where the CRIT bonus does not apply (as in the hits don't CRIT).

Scenarios where the CRIT Rate can expire:

Significance:
More understanding of how the buff works. Can't make use of the buff if the character is too far away from the cast area. Doesn't actually apply in realistic combat if you play Xiao normally (as in plunging at the right vertical height, rather than at the limit). Can potentially matter against enemies with hitboxes that increase Xiao's jump height. Just don't jump too high.

Finding 6:
Stonewall buff is based on the position of the initial cast point, not the final position of the walls. You cannot expand the buff area by using Burst on an uneven location. It is also possible to obtain and lose the CRIT buff repeatedly by vertically entering and leaving the buff area.

Significance:
Further understanding. Supporting the overall concept of the interaction.

Finding 8:
Standing on the meteorite does not remove the Stonewall buff. However, standing on taller Geo Constructss such as Zhongli's Stone Stele means losing the CRIT buff as it is already out of range.

Significance:
Rockstep and other combos that bring a character on top of the meteorite does not compromise the Stonewall buff.

Evidence: Twitch Clip lost to the sands of time

Significance: Geo MC can make the most constructs on the game (2 Meatballs which cap to 3 with Zhong Pillar, and 4 from Ult which don't count towards cap. This can turn small arenas into multi-hitting funzones.

Finding:
It is possible for Geo Traveler to jump directly from the ground to the top of the meteorite created by Starfell Sword (E), giving characters vertical advantage and allowing certain actions such as plunge attacks. This mechanic can also be used by other characters in the party.

Significance:
This is a GMC-specific tech that can be used by other characters. There's potential gain for characters that benefit from having vertical advantage over the enemies, and doing so can trigger certain enemy patterns that may be beneficial to the player.

Analysis on the best weapons/builds for Main DPS Aether and Burst Support Aether.